A little history and practical information

The Galapagos Archipelago was first discovered by accident in 1535, when Tomás de Berlanga, the first Bishop of Panama, drifted off course whilst sailing from Panama to Peru. The islands didn’t appear on a map until 1570, where they were identified as the ‘island of the tortoises’. The first rough charts of the archipelago were made by buccaneers in the late 17th century, and scientific exploration began in the late 18th century. 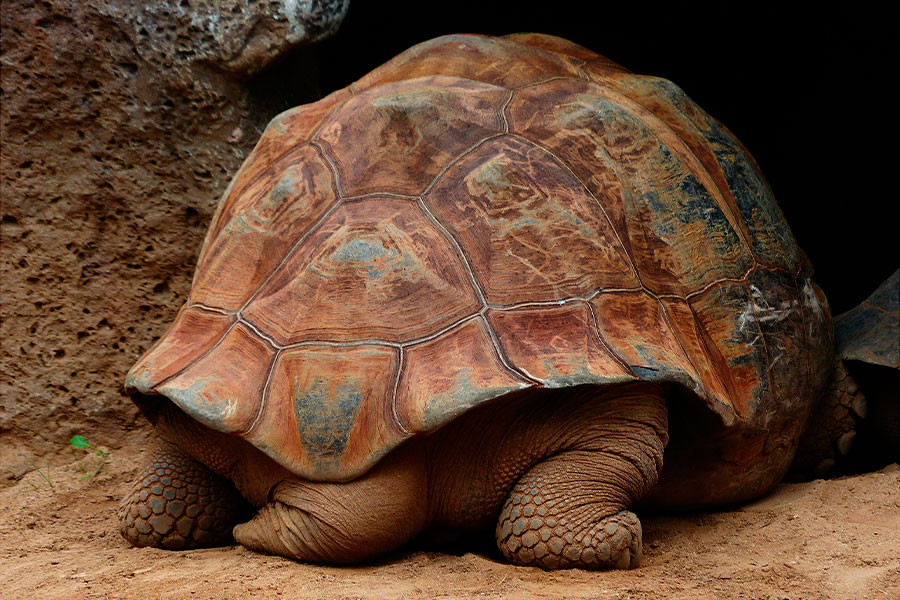 For more than 3 centuries after their discovery, the Galapagos were used as a base by a succession of buccaneers, sealers and whalers.

The islands provided sheltered anchorage, firewood, water and an abundance of fresh food in the form of the giant Galapagos tortoises, which were caught by the thousands and stacked, alive, in the ships holds. More than 100,000 are estimated to have been taken between 1811 and 1844. The tortoises could survive for a year or more and thus provided fresh meat for the sailors long after they had left the islands. (Lonely Plant, 2009).

“[The tortoises] have of course been greatly reduced in this island, but the people yet count on two days hunting giving them food for the rest of the week. It is said that formerly single vessels have taken away as many as seven hundred, and that ship’s company of a frigate some years since brought down in one day two hundred tortoises.”

Ecuador was officially claimed the Galapagos in 1832 and General Villamil was named the first governor, basically in charge of a single colony on Floreana of ex rebel soldiers. For roughly one century thereafter, the islands were inhabited by only a few settlers and were used as penal colonies, the last of which, on Isla Isabela, was closed in 1959.

Tour boats began in 1969 and, by the mid 1980s tens of thousands of people from every nation were coming each year to witness what has so often been called ‘the last paradise’.

Some of the islands were declared wildlife sanctuaries in 1934, and 97% of the archipelago officially became a national park in 1959, whilst the government, in 1986 formed the Marine Resource Reserve. The Charles Darwin Research Station on Isla Santa Cruz began operating in 1964 and the Galapagos National Park Service was formed in 1968. In 2001 Galapagos Marine Resources and Reserve was declared a World Heritage Site. 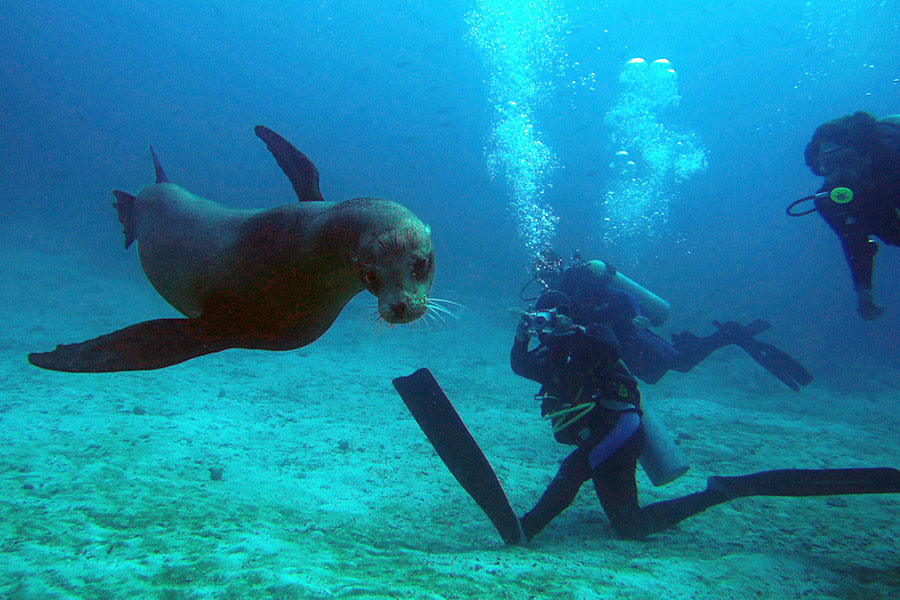 To many the Galapagos Islands are located in a far off mythical place where giant tortoises roam wild, where sea lions playfully nip marine iguanas as they dive for their lunch, where schools of hammerhead sharks cruise the ocean floors and rock reefs between thousands of fish, and where the skies are filled with majestic birds of many types. The only difference with that picture and the true Galapagos is that you can be there too, to witness all these amazing animals and the strangely stunning surrounds they live in.

“Nothing could be less inviting than the first appearance. A broken field of black basaltic lava thrown into the most rugged waves, and crossed by great fissures, is everywhere covered by stunted, sunburnt brushwood, which shows little signs of life. The dry parched surface, being heated by the noon day sun, gave the air a close and sultry feeling, like that from a stove: we fancied that even the bushes smelt unpleasantly.”

Rise from the depths

Far out in the quiet Pacific, the low-domed backs of massive shield volcanoes rise from the depths. Here and there they break the surface as islands. Across great spans of time these islands have wandered, like so many giant tortoises bathing in a pool.

The Galapagos Islands are located in the Pacific Ocean, over 1000 km west of Ecuador, and consist of 13 large islands, 6 smaller islands and 107 islets and rocks scattered over 430 km of open ocean, from Darwin Island in the northwest to Española in the southeast.

Due to the volcanic activity on at least 2 of the islands however, there are the occasional eruptions, new lava fields forming and expansion and eroding of islands. The last eruption was on Ilsa Isabela, in 2015. The north of the island is not inhabited by humans, so the only danger, if you were lucky, was getting too close in the boat whilst watching the explosions of lava from the crater, and the rivers of molten rock run into the sea.

Española lies on the south-eastern edges of the archipelago and is the oldest of the islands. It’s volcanoes have long since been levelled by erosion and, with no elevation to condense clouds, hardly any rain falls.

The islands are not only building and eroding, however. They are also travelling. They lie atop the edge of the giant Nazca plate, which is shifting southeast towards South America at about 4cm a year! As they distance themselves from the hotspot they become increasingly inactive. They, and the crust below cool and contract. The islands slowly sink.

The Galapagos archipelago is so far removed from any continental landmass that its climate is largely determined by the complex pattern of ocean currents that sweep its shores, driven by the trade winds. Conditions are never predictable and are often severe.

There are two broad seasons in Galapagos.

June to November: is known as the garùa season, when air is generally cooler and foggier and the seas more choppy, under the influence of the Humboldt Current and the southeast trade winds. This is the dry season, where the coastal areas receive no more than 10mm of rain per month. Temperatures can drop as low as 20C, and averaging 22-24. Water temp is 16 – 20C/ 60-70F.

December to May: is the warm season, when the southeast winds slacken, warmer waters from Panama Basin move in, the skies clear and temperatures can rise above 32C with humidity being 70 to 80% daily, averaging 26-32. Water temp is 22-27C/ 71 – 80F. There is a much more of a tropical feel to the islands, interrupted by the occasional downpour.

A land fit for fiends

The first Spanish navigators to chart the Galapagos archipelago were convinced they could see the islands move. These lands were bewitched- cursed even. They called them Las Encantadas, the Enchanted Isles: an earthly Tartarus at the furthest edge of the known world. A land fit for fiends, but not for men.

There are presently 3 airlines which operate out of Quito and Guayaquil who bring passengers to Galapagos, Avianca, TAME & LAN. It is possible to obtain a seat at the airport on the day of departure, but to avoid disappointment it is best to reserve ahead of time. The prices are very similar and expensive, but it is the only option we have.

From the Airport
There are two airports in Galapagos that receive planes from the mainland. The main airport is located just to the north of Santa Cruz on Ilsa Baltra, where a public bus and ferry carry you to Puerto Ayora, the main town on Santa Cruz. The journey takes approximately 1 hour and involves a bus, then a ferry and then another bus or taxi.

The other is located on Isla San Cristobal, where it is a short walk or taxi ride into town. A lot of the cruises depart from San Cristobal, so when booking your ticket, make sure you are going to arrive at the right island!

Sea
There are ferries that transfer passengers between islands, though the Schedule can be somewhat unhelpful at times. These ferries are speed boats and well known for claiming the souls of persons vulnerable to seasickness in the colder months. Please remember your seasickness tablets!

The ferries from Santa Cruz to San Cristobal and Isabela leave at the same time – 7am and 2pm everyday and return from Isabella to Santa Cruz is at 6am and 3pm everyday.

The ferry from San Cristobel to Santa Cruz is 7am and 3pm everyday.

It is possible to get a ferry to Floreana without doing a day tour but it will have to be arranged with a local boat the day before you wish to go.

Air
There is a small passenger plane that flies between Baltra and Isabela and San Cristobal. Approx $170 each way (at the time of writing). The extra cost might be worth it in the colder season when the ocean is rough if you are prone to sea sickness.

The following taxes and fees are charged during your entry and stay in Galapagos.

$100 (cash only) National Park entrance paid at the airport upon arrival to Galapagos. There are rumours that this may increase to $200, but nothing has been confirmed.

12% sales tax charged on nearly all food and goods purchased.