You are here: Academy Bay Diving > Trip > Where in the world are The Galapagos Islands?

Where in the world are The Galapagos Islands?

The Galápagos Archipelago is part of the country of Ecuador and is situated 906km (563 miles) off the coast of the South American continent in the Pacific ocean. The islands straddle the equator, and cover an area of approximately 45,000 square kilometers (17,000 square miles), compromising of 19 islands and hundreds of islets and rocks. 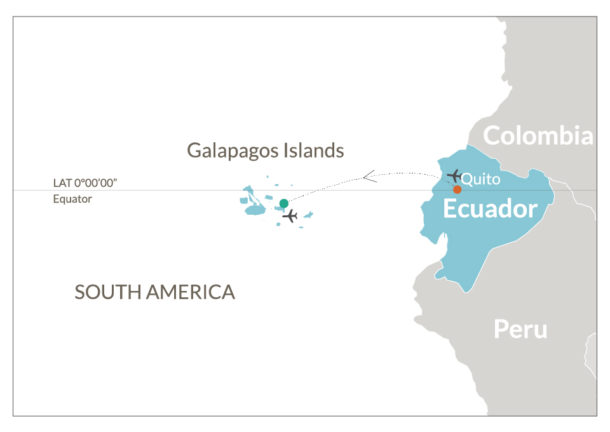 Volcán Wolf (the highest point at 1,707m above sea level) and Volcán Ecuador on Isla Isabela are directly on the equator. Española Island, the southern-most islet of the archipelago, and Darwin Island, the northern-most islet, are spread out over a distance of 220 kilometres.

The 5 inhabited islands are Isabela, the largest measuring 5,827 km2 and making up almost three-quarters of the total land area of the Galápagos, Santa Cruz, the most populous, San Cristobal, the home to the Galapagos capital, and Floreana, with the smallest population of approx. 200 people. The fifth island is Baltra which has an airport, tourism dock, fuel containment, and military facilities. 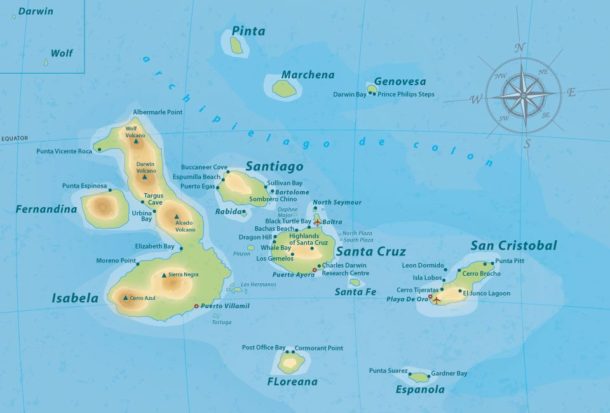 The archipelago is located on the Nazca Plate (a tectonic plate) and also sits atop the Galápagos hotspot where the Earth’s crust is being melted from below by a mantle plume creating volcanoes. The first islands formed here at least 8 million and possibly up to 90 million years ago, the oldest islands having already disappeared below the sea, whilst the youngest islands, Isabela and Fernandina, are still being formed.

Most of the islands represent the summit of a volcano, some of which rise over 3,000 metres from the Pacific floor. The larger islands typically comprise of one or more gently sloping shield volcano, culminating in collapsed craters or calderas. Long stretches of shoreline are only slightly eroded. In many places faulting and marine erosion have produced steep cliffs and lava, coral or shell sand beaches. Other features include crater lakes, fumaroles, lava tubes, sulphur fields and a great variety of lava and other ejects such as pumice, ash and tuff. 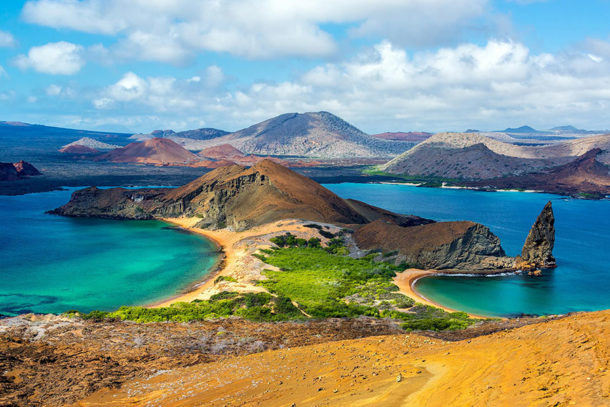 Take a land tour to Bartolome

Now you know where the islands are….How do you get here?!

There are no direct international flights into the islands, they are domestic flights originating in Quito, Guayaquil and a new route, Manta. People travelling from Europe will generally fly from Madrid or Amsterdam directly into Ecuador, whilst people coming from the UK now have a direct flight into Colombia, with connection to Ecuador.

Coming from the US, most flights have a stop over in Miami, giving you an excellent opportunity to extend your vacation, warm up along the way and explore a bit of Florida and Key West by boat.

Due to flight arrival times into Ecuador most travellers will need to spend 1 night in the mainland Ecuador and take an early flight to the islands the following day. Please ask us for help with airport transfers and hotel bookings, and even city tours and day trips to surrounding areas like Cotopaxi, Otavalo market, The center of the World or Mindo Cloud Forrest if you would like to spend a few days getting to know these cities also.

If you are looking for another island adventure after your Galapagos trip, why not head to the Greek islands, specifically Rhodes tour and continuing your journey there!

Join us discovering more information about the Galapagos islands at these links. Where the currents converge, breathtaking dive sites, available tours and packages, and much more!